With the victory in the last regatta, the sailing team Tina Mrak – Veronika Macarol won the final sixth place in 470 class at the Olympic Games in Rio de Janeiro. Unfortunately the penalties in the eight regatta, which were fatal in the race for the medals, brought along some bitter taste.

Just before saying goodbye to Rio de Janeiro, Tina Mrak and Veronika Macarol proved that they belong at the very top of the world regarding 470 fleet sailing teams. The girls from Slovenia swept away with all competition in the final regatta. At the end, after all eleven voyages, that result was enough for final sixth place with 67 points.

The competition for girls in 470 category should have already ended on Wednesday, but the organizers had some problems with the lack of wind. The girls waited three hours for a small breeze, until they postponed the regattas on Thursday. 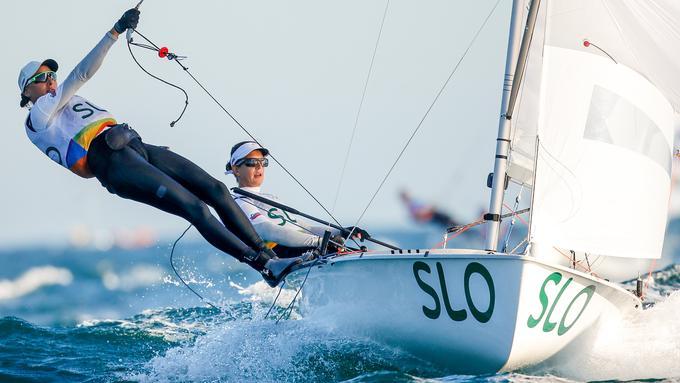 Veronika Macarol and Tina Mrak waved goodbye to Rio with a victory in the last race. Photo: STA

It could have ended differently

Slovenian duo began Olympic games with second place and finished the games with a first one. In between they also reached high placements several on different occasions. The combined total of points would be enough for a place on the podium, but the disqualification due to Japanese appeal in eight regatta proved to be fatal. The disqualification itself brought another 21 points for Slovenian team and cost them the medals.

For this reason, the final victory also had a bitter touch. »We planned these Olympic Games differently. It looked well at first. It’s a shame. But with last regatta we still proved where we belong,« said Mrak upon landing ashore at Marina de Gloria. »It’s difficult to accept this outcome. We had a silver medal in our pockets« added Macarol.

Gold to the British

British duo Hannah Mils – Saskia Clark won the gold medal, while Jo Aleh – Polly Powrie from New Zeland were second and Camillie Lecontre – Helene Defrance from France were third. The Japanese pair, who due to a penalty »cost« potential medal for Slovenia, were in fifth place.

Thanks for your support